How to Play DSD-files in iTunes using Bitperfect

• NativeDSD.com is the largest high-resolution download store for DSD and DXD music, with over 2,100 Albums from over 75 Record Labels.

NativeDSD recommends listeners to use premium apps like Roon, JRiver or Audirvana. The below workflow is time-consuming, so if you have a lot of files, this can be disappointing.

There are two apps, both made by the same company, that you need in order to play DSD files within iTunes on a Mac. In this article I will explain what these two apps do and why you need them.

1. Installing the BitPerfect App to get ready for DSD playback in iTunes

As its name implies, BitPerfect will automatically change the system’s bit depth automatically so that you are playing hi-res music files bit-perfectly each time.

The preference pane can be accessed via the BitPerfect App that is running in your menubar. The below settings in BitPerfect are recommended for DSD playback. 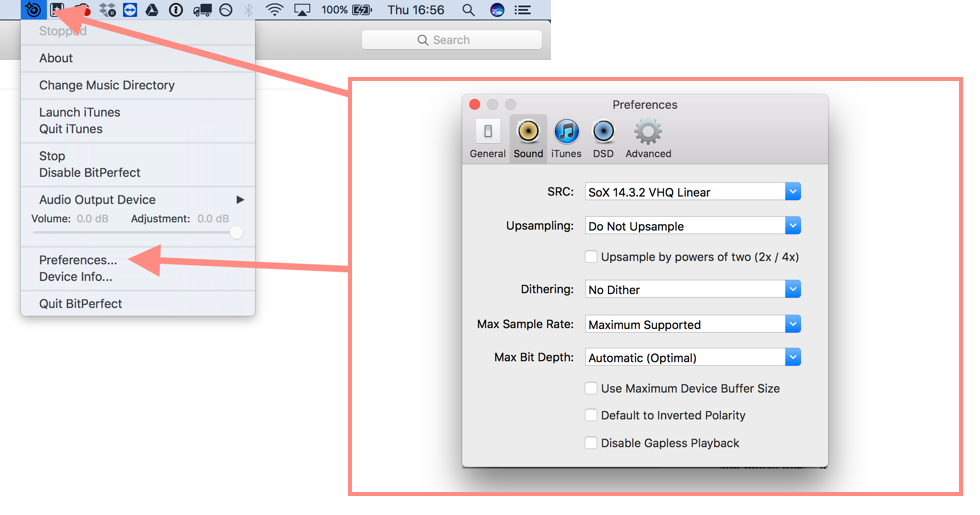 2. The DSD Master app, that creates the "Hybrid-DSD"-files

What DSD Master does

DSD Master creates a file format which are termed "Hybrid-DSD". (This has no connection to SACD, by the way). Hybrid-DSD is a file format which looks to the world exactly like an Apple Lossless (ALAC) PCM file with an .mp4 extension, and functions exactly like one.  "Hybrid-DSD" files can be loaded into iTunes, or into any other player which supports the Apple Lossless format, and will play music like normal.  A "Hybrid-DSD" file contains a PCM copy of the DSD original.  However, it also contains the original DSD data, encoded within the file in such a way that iTunes and other players won't attempt to read it.  If BitPerfect is asked to play this file, it is able to read both the PCM and the DSD versions.  If your DAC supports DSD, then BitPerfect will automatically play the DSD version, otherwise it will automatically play the PCM version (inside that SAME file!).

Open the DSD Master app and select Hybrid-DSD as the output file. The sampling rate can be anything you want, note that higher rates will take longer to create. This rate is only specifying the ALAC part of the Hybrid file, and does not affect the DSD Data (of course!). 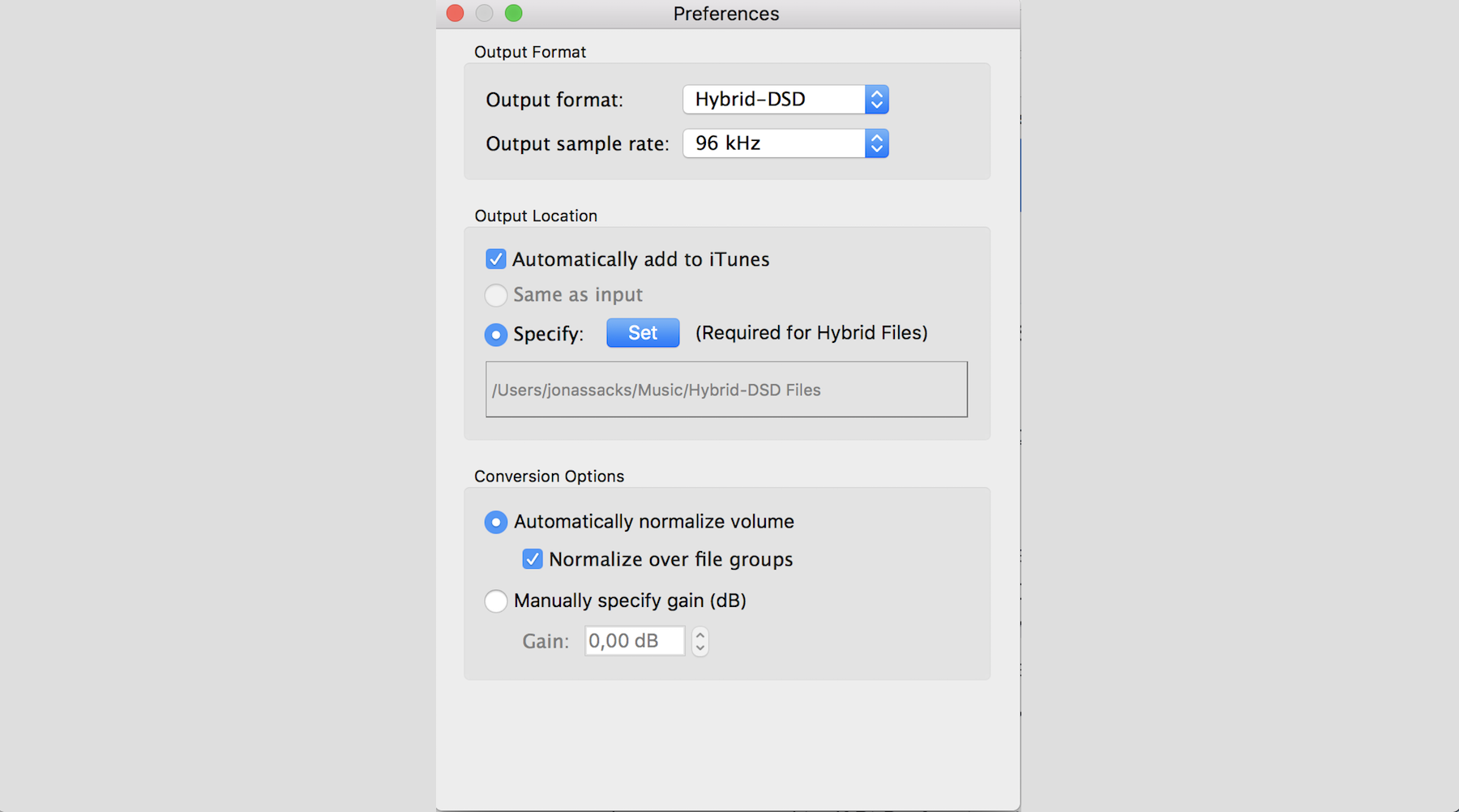 Once your settings are set, open the DSD files you want to add to iTunes using the ⌘-O. Or select File > Open. The DSD file will automatically start converting to Hybrid-DSD. This new file will then be imported into your iTunes library from where you can play it. 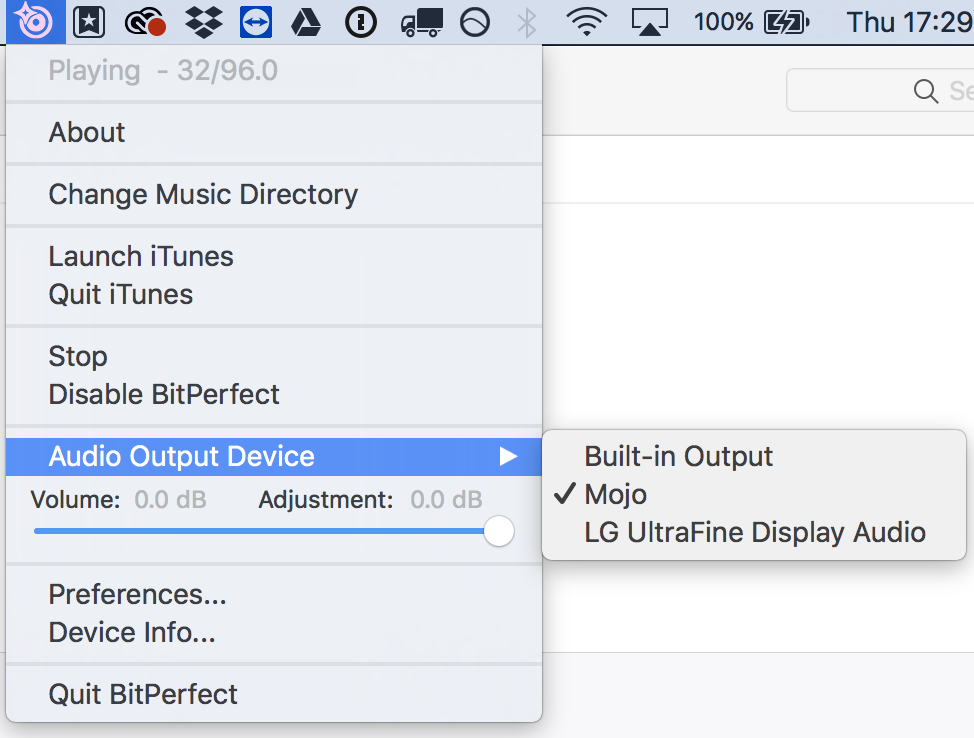 In the preferences window, select the DSD tab, and then tick the enable DSD checkbox. You will be presented with a warning. It will look like this: 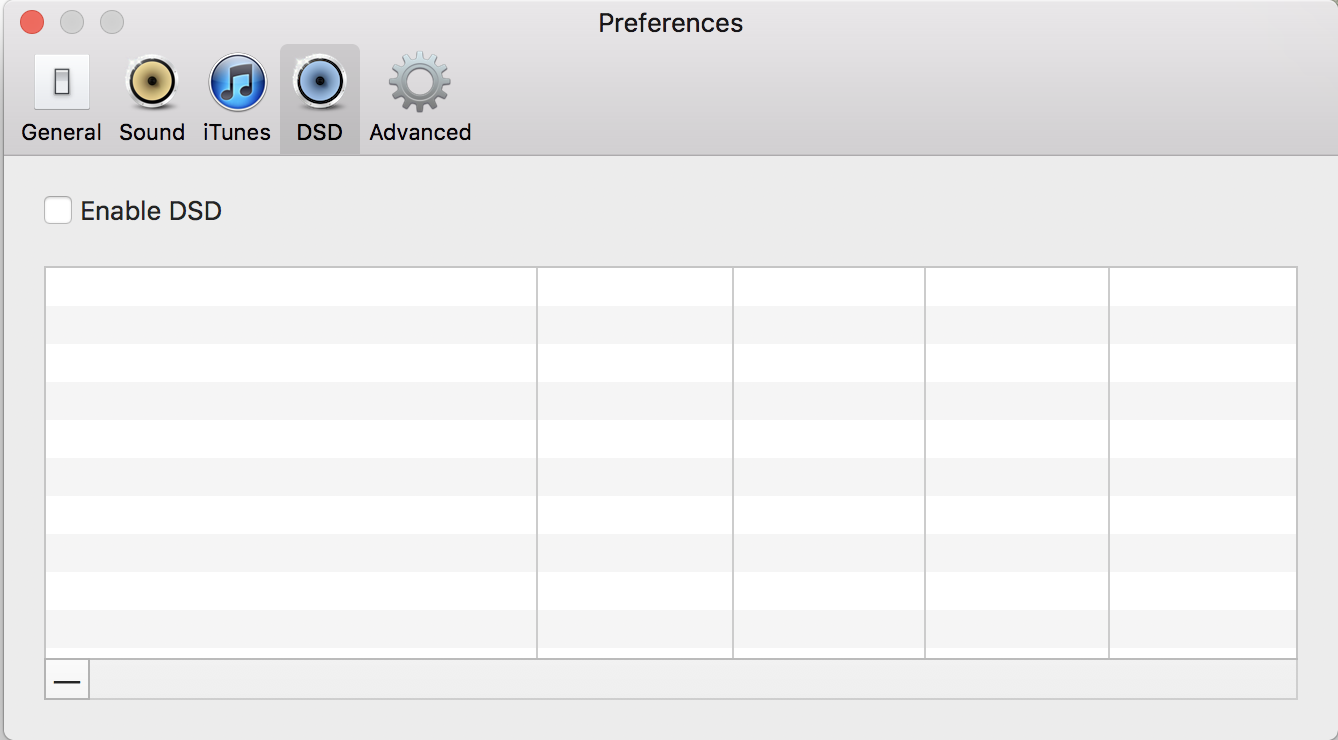 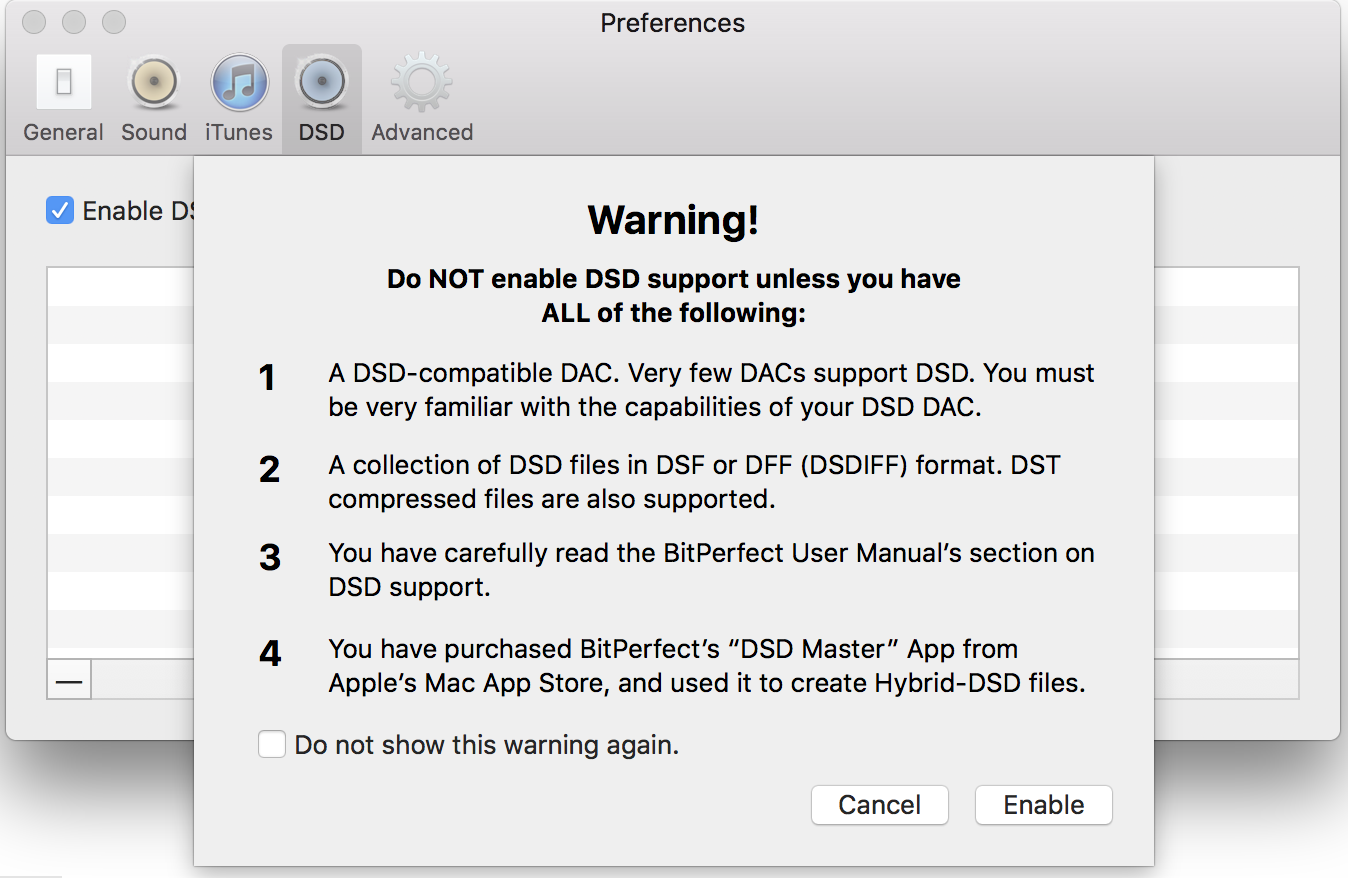 Your device (in this example a Chord Mojo) will show up in the device list.

Adding the Hybrid-DSD files to your iTunes library, if not done so already. And you are all set to Play DSD from iTunes!

In the BitPerfect app in the menubar, you can monitor at which resolution your iTunes is playing back. 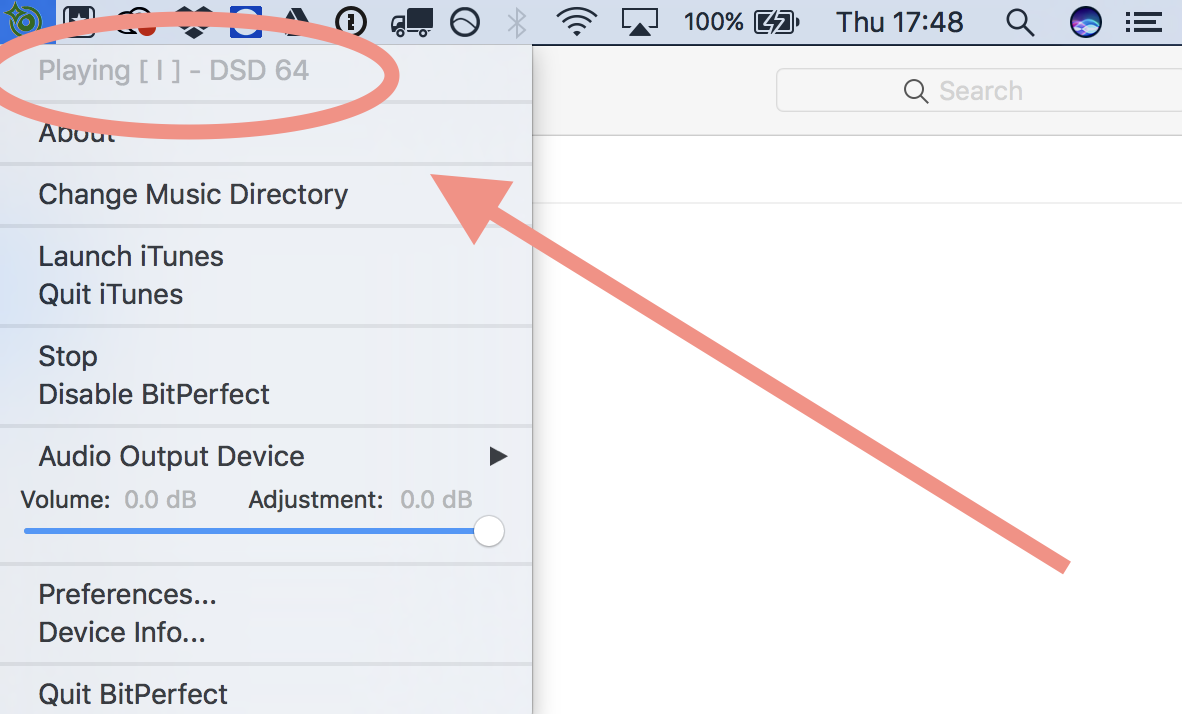 **IF** you have set up your iTunes to “Copy files to iTunes Media folder when adding to library”, then after you have created your Hybrid-DSD files in whichever folder you placed them (let’s call it ‘folder X’), iTunes will copy them to the iTunes Media folder. What you must then do is delete them from ‘folder X’ … unless of course you have a specific desire to maintain two copies of those Hybrid-DSD files.  If you have not enabled this feature in iTunes then you won’t have to worry about this.